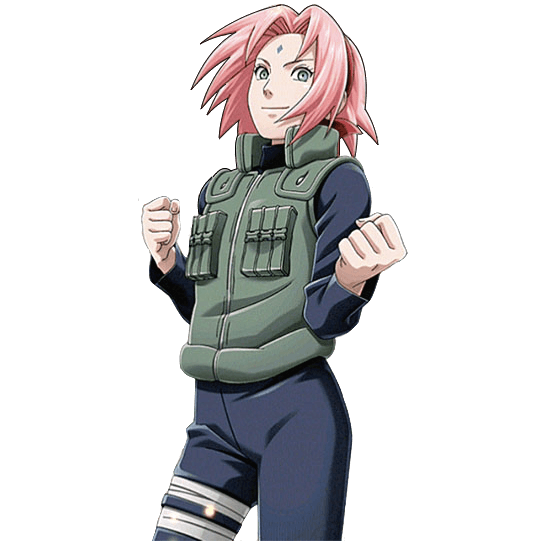 Sakura started out without any real ambition other than becoming the girlfriend of Sasuke. She also wasn’t really talented as a shinobi, and was easily scared and defeatable in battle. All these traits made her very dependent on her teammates when any type of challenge arrived. However, there were numerous moments where she showed true courage despite her lacking of power.

One thing Sakura did excel with was her knowledge of chakra and chakra control. An example of this was when Kakashi made Team 7 do a tree climbing training, and Sakura easily mastered this exercise before Naruto and Sasuke. This talent would later serve a greater purpose, as she would apply it to other types of jutsu.

Sakura was dealt a huge mental blow after Sasuke deserted Konoha to train under Orochimaru. She was betrayed by both her crush and her comrade. After this she had to become stronger to bring him back, and she obtained a strong desire to improve as a kunoichi.

Becoming a medical expert and a capable shinobi

Tsunade turned out to be the perfect teacher for Sakura, as they both possessed similar talents and skills. She became a powerful shinobi under the Fifth Hokage’s wing, and only improved further as time passed. Towards the end of the series, Sakura become powerful enough to battle against some of the strongest shinobi in the world.

Being her own person

Despite her growth as a person and shinobi, she always felt to be in the shadows of Naruto and Sasuke. But after the many displays of her skills and power, she realized she was her own person that could stand side by side with her comrades.

You will find our picks for Sakura’s best jutsu, most important moments, and best fight scenes below.

Sakura’s summoning jutsu is the same as Tsunade’s. The giant slug Katsuyu is a powerful animal to use for both offensive and defensive purposes. Due to Sakura’s role as a medical shinobi, she usually uses Katsuyu to support injured shinobi on the battlefield. 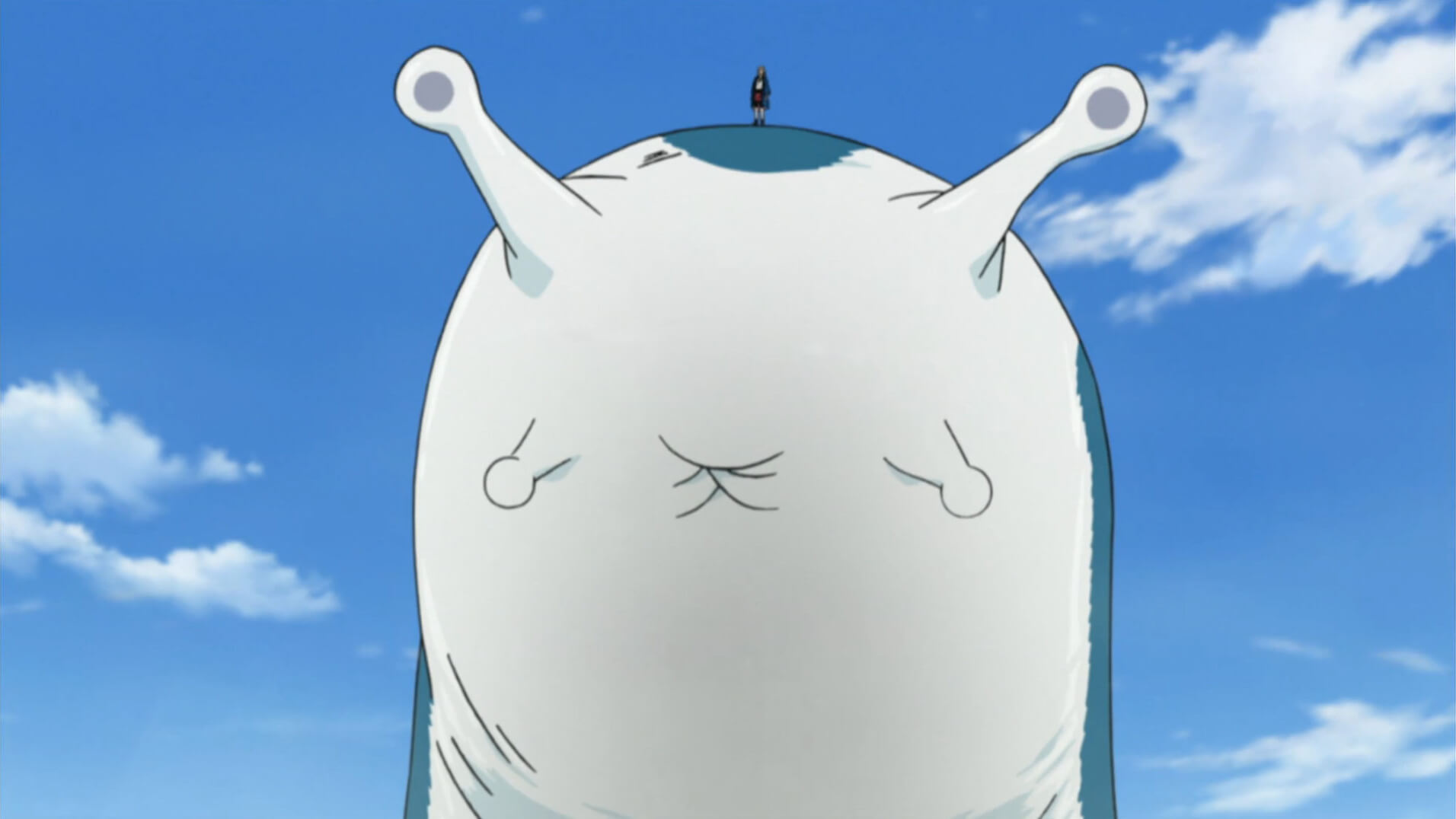 Sakura possesses immense physical strength, even surpassing powerful characters like the Raikage and Kakuzu. Because of her naturally high chakra reserves and chakra control, she is seemingly able to use her strength in battle without getting tired. Thus, always posing a threat to any opponent. 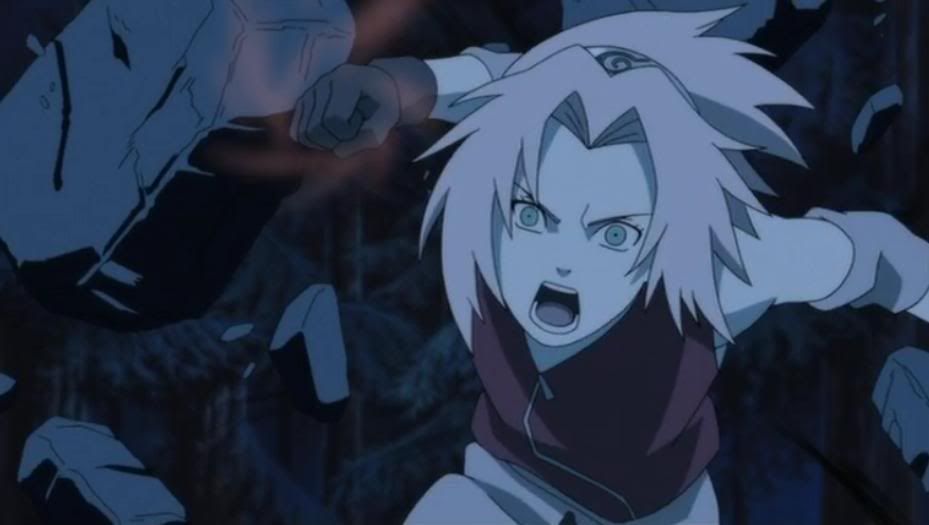 The Byakugō seal, also known as the Ninja Art Creation Rebirth — Strength of a Hundred Technique, is a technique that tremendously increases Sakura’s strength. The technique also allows Sakura to almost instantly heal from any sustained injury. 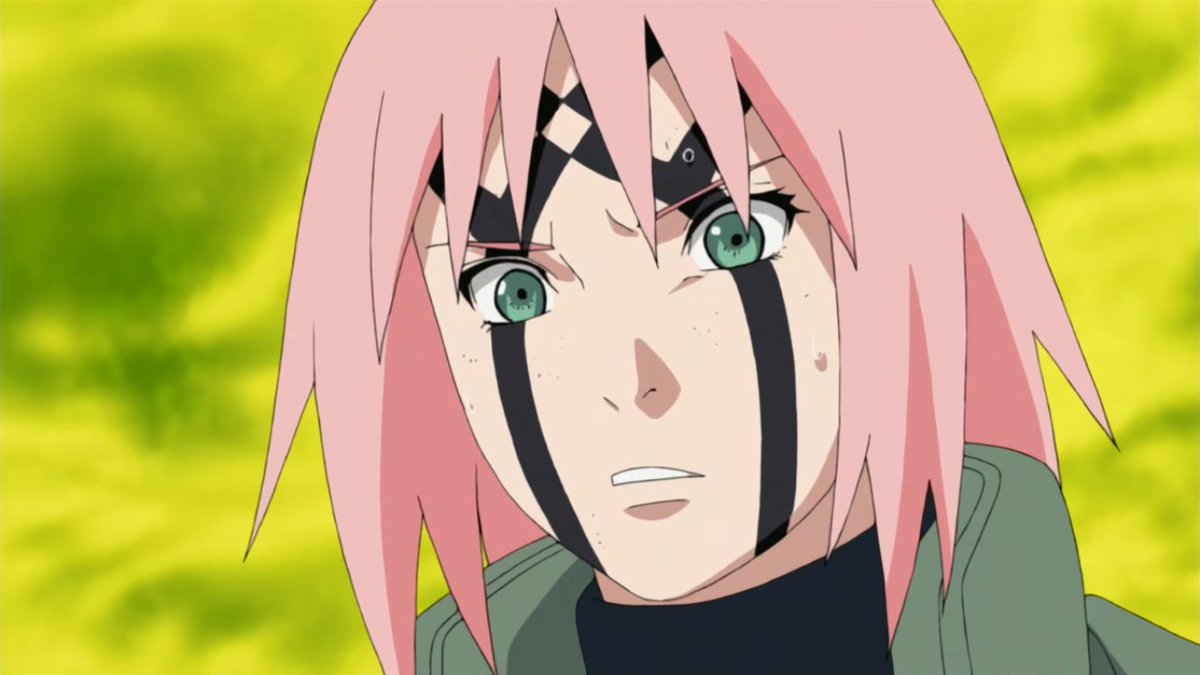 The three moments below are the most important moments for Sakura as a character.

3. Protecting Naruto and Sasuke and Cutting her Hair

It was in this moment that Sakura decided what was worth more to her, her superficial interests or protecting her friends. It wasn’t important to impress her crush Sasuke anymore, which was her only goal up until this point, but she had to protect her friends who were in imminent danger.

Sakura had a natural genius for chakra control, but the training she had didn’t allow her to fully reach her potential. Becoming a student of Tsunade really enabled her to reach hights she wouldn’t even dream of. 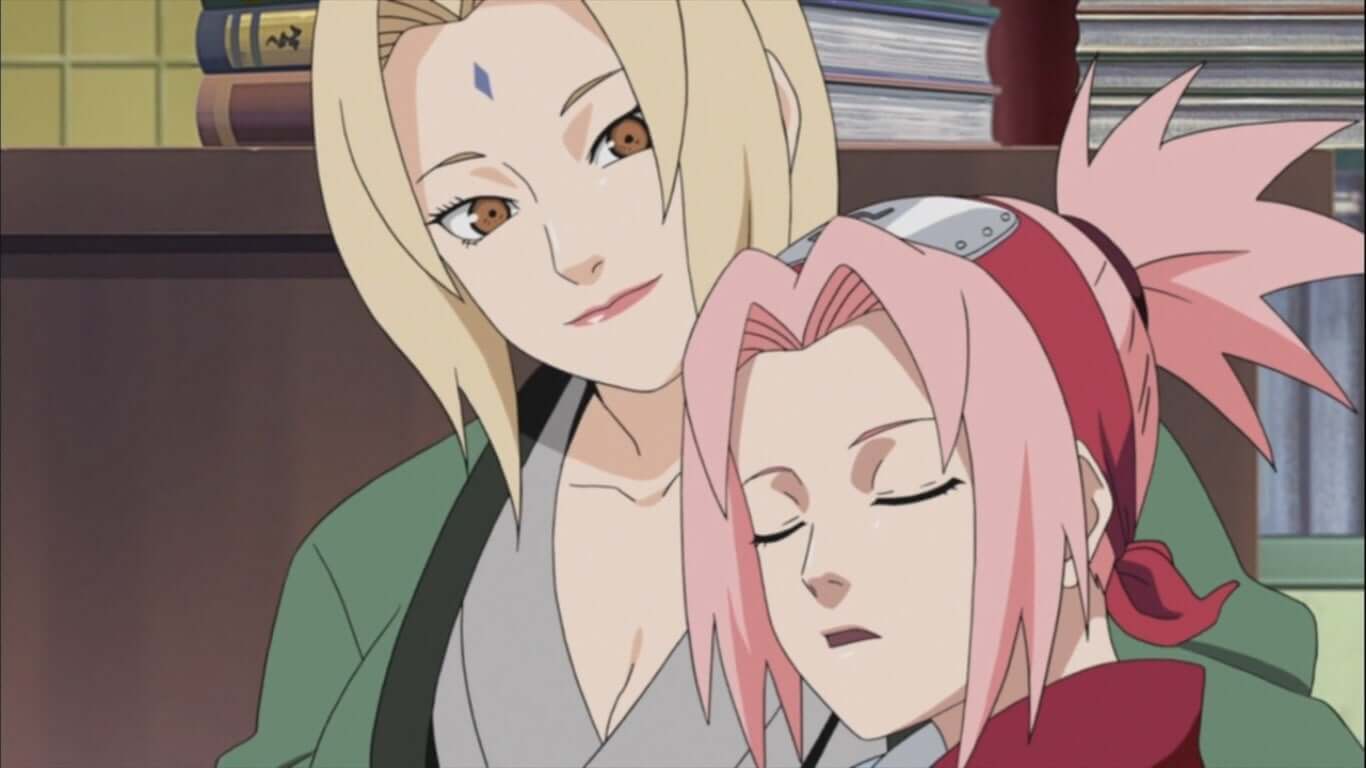 1. Obtaining the Strength of a Hungdred Seal

Obtaining and being able to use this technique really gave Sakura the confidence to say she can stand next to Naruto and Sasuke instead of behind them. For the entire story, she always ran after these two and never felt like a person who deserved to be respected.

After using this technique on the battlefield, she finally decided to who she had been all along. 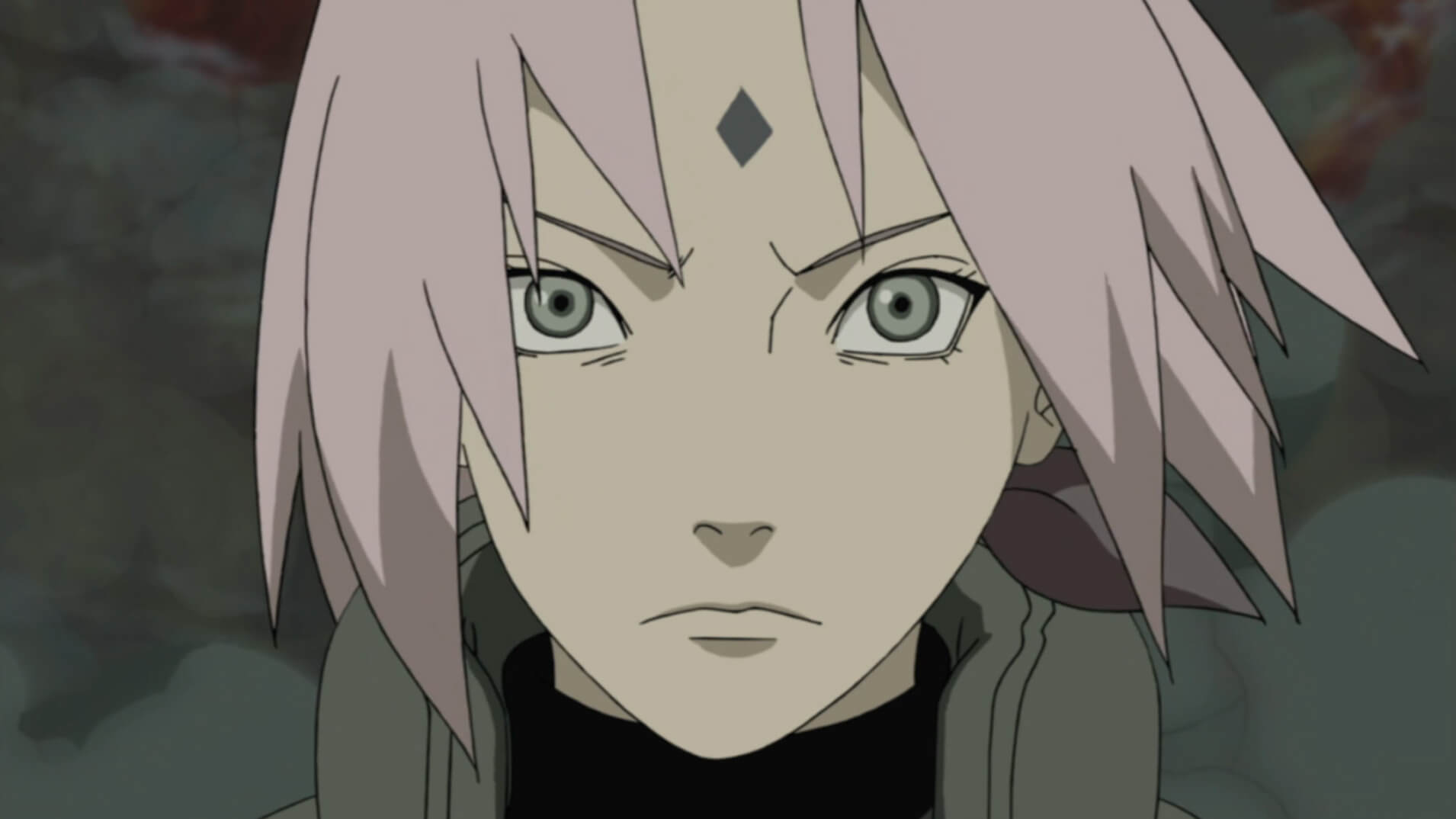 Sakura doesn’t really have a lot of 1v1 fights, but she did have some good fight scenes. Here are our favourites below.

Sakura had a long lasting rivalry with Ino Yamanaka and was finally able to settle it in this battle. However, Ino and Sakura actually become closer after this, and would eventually fight as comrades later on.

It wasn’t a standout battle in the story, but because of the history between Sakura and Ino and their future friendship we think it deserves to be on this list.

Sasori was Sakura’s first extremely dangerous opponent. An Akatsuki S-Rank member who had killed the Third Kazekage. This was the most danger Sakura had ever been in.

She played a huge part in this battle, but only downside with this battle was that Sakura had to be protected and taken care of by someone else again. It does make sense however, someone like Sasori was not going to be defeated without the help of a legendary shinobi like Chiyo. 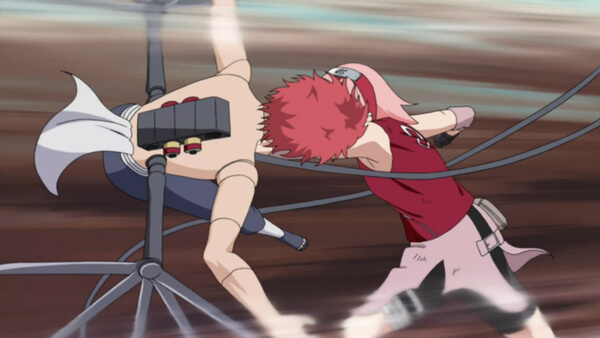 Sakura didn’t have a main role in this fight like the other 2 on this list, but this battle is too significant to not put on the top of this list. Kaguya was the strongest shinobi to had ever lived, and the weak/useless Sakura was battling against her.